How to get to the Hotel Convento do Salvador

The Hotel Convento do Salvador is, as most treasures, challenging to find. Once there, we are sure that you will not regret your efforts.

Access to the hotel in own or rented vehicle is conditioned, since we are in a historical district of Lisbon.

Public parking is possible at a location nearby (subject to availability). Cost: EUR 15 per day.

The Soul of Fado

Fado is one of the few traditional urban sounds of the world. It has travelled from the streets of 19th century Lisbon to the top of the World Music charts. From amateurs in traditional taverns to Fado House professionals, feel the authentic soul of Lisbon. 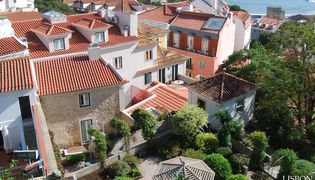 A different city may be found within each neighbourhood of Lisbon: the historical centre of Lisbon founded by the Phonecians, which went on to become the Jewish quarter (Alfama), Moorish Lisbon (Mouraria), Bohemian Lisbon (Bairro Alto), the elegant Lisbon of the Belle Époque (Chiado) and romantic Lisbon (Príncipe Real). There are also the more modern neighbourhoods, dating back to the early 20th century (Campo de Ourique) and mid 20th century (Avenidas Novas), and futuristic Lisbon (Parque das Nações). 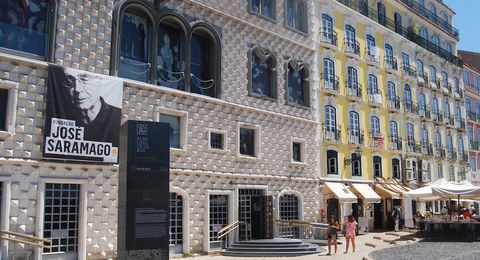 This curious building was constructed in 1523, and inspired by the Venetian palazzos. It acted as residence to Afonso de Albuquerque, Governor of Portuguese India, and one of the few buildings to survive the 1755 earthquake. Its façade has over a thousand studs, and the upper two floors display Manueline-style windows.

The interior was renovated to host the José Saramago Foundation, and designed for the presentation of cultural events and to accommodate the library of the Portuguese Nobel Laureate. 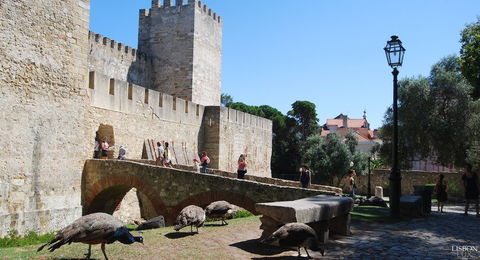 The castle of Lisbon is at the top of the city's highest hill, offering one of the most breathtaking views of the city and river. Partly in ruins, partly restored, it is a romantic mirage that has stood for a thousand years.

Possibly the most popular tourist attraction in Lisbon: a journey through time, climbing hills and medieval streets in old carriages moved by electric power, which are still a part of the city's public transport network, from which some of the most picturesque neighbourhoods and main monuments of the capital may be observed.

The line of emblematic tram 28 was launched in 1974 and now covers a route of 7km between Praça de Martim Moniz and Prazeres (or between Graça and Estrela, a shorter itinerary). 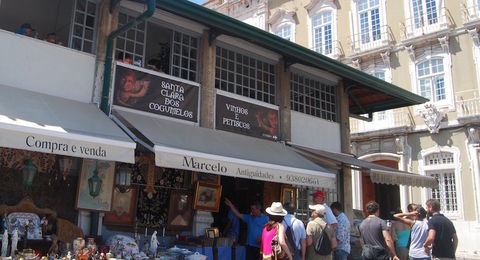 This flea-market is held every Tuesday and Saturday, starting at dawn and ending at dusk. It is a second-hand market, where items are sold from tents, stalls and even cloths spread out across the pavement and road: furniture, scrap, books and magazines, clothes, vinyl records, pictures, etc., but new objects are also sold here, especially clothing and crafts.

This flea-market established itself in Campo de Santa Clara in the early century. The ideal entry is by Arco de São Vicente, where the famous Tram 28 stops.

Do not be afraid to haggle: it is part of the game. 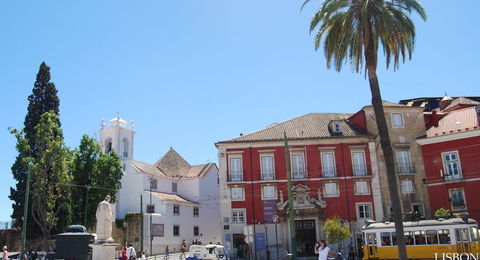 In 1953, Ricardo do Espírito Santo Silva, a banker and collector, donated Azurara Palace and part of his private collection to the Portuguese Government. Thus, the Foundation was born, bearing his name, and created as a Museum-School, with a view to protecting and disseminating Portuguese Decorative Arts and related trades.

Today, in addition to the Decorative Arts Museum, the Foundation has 18 traditional Portuguese arts and trade workshops which keep alive a highly important legacy of know-how, while guaranteeing specialized intervention in terms of Portuguese heritage through its conservation and restoration dimensions.  It also has two schools for the teaching of Arts: the Higher School of Decorative Arts (ESAD) and the Institute of Arts and Trades (IAO). 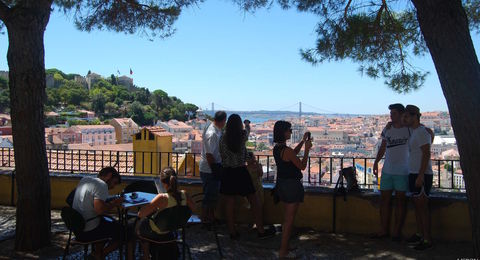 As seductive as the enchanting streets of Lisbon are, they also frequently lead up to the hilltops, obliging the visitor to stop and admire the views from their belvederes. Those who pass here are left feeling that this is one of the finest cities in the world. 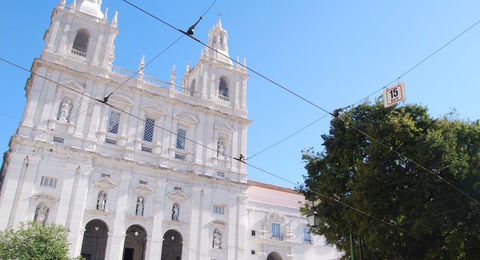 The towers of this monastery stand out in the Lisbon landscape. One of the most amazing views may be observed from its terrace and its extraordinary interior is decorated mainly in tiles. It is, therefore, one of the most fascinating places in Lisbon, especially the series of 38 panels surrounding the cloister, displaying La Fontaine's Fables. 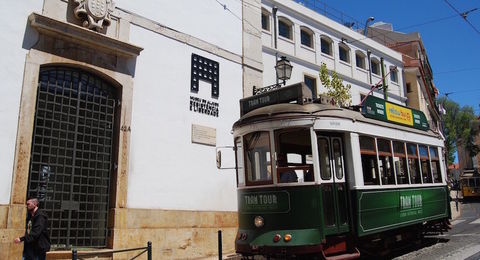 Museum of Aljube – Resistance and Freedom

The Museum of Aljube - Resistance and Freedom is dedicated to the memory of the fight against the dictatorship and resistance for the sake of freedom and democracy.

It is a municipal museum aiming to fill in the gap of the Portuguese museological fabric, by projecting the importance of this memory in the construction of responsible citizenship, and by assuming the fight against an exonerating amnesia, frequently an accomplice of the dictatorship confronting Portugal between 1926 and 1974.

MUDE is installed in a former banking institution. It has a collection of fashion and design, with pieces ranging from the 20th century up to contemporary times.

More than just a tribute to national music, this museum also displays the cultural and political ambience of Lisbon during the 20th century.

An audio guide explains what is on exhibit (in Portuguese, English, French and Spanish), and a multimedia service offers the possibility of consulting recordings, biographies and historical images. 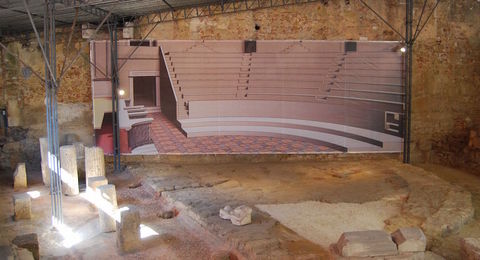 This small museum (free entry) reveals Roman Lisbon. It exhibits pieces found during the excavations of what was once a theatre in the 1st century (and may be seen behind the museum), while multimedia screens tell its story.

The theatre had a seating capacity of up to 5000 spectators, but only a third was uncovered during the excavations.

The MNAC or Chiado Museum displays Portuguese art from the 1850 to 1950 period.

The collection is shown in temporary thematic exhibitions, including some of the emblematic works of Columbano Bordalo Pinheiro, Amadeo de Souza-Cardoso and Almada Negreiros, as well as a fine sculpture by Rodin. 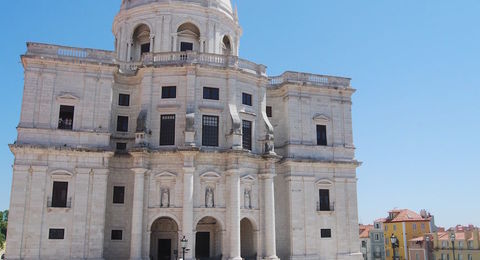 Portugal's National Pantheon, also known as St. Engratia Church, took three centuries to build (from 1682 to 1966). It's a baroque monument built on an octagonal floor plan centered on a Greek cross, with a dome standing out in the city's skyline.

The colored marble interior is the resting place of the most important cultural and political figures in the country, with cenotaphs of explorers like Vasco da Gama, and the tombs of personalities like Fado singer Amalia Rodrigues. Visitors may also go up to the dome's terrace for views over the old city.

The largest square in Lisbon faces onto the river and was originally planned to welcome those arriving at the city by ship. Today, its 18th century version may be observed, as the original (called Terreiro do Paço, where the royal palace was located) was destroyed by the 1755 earthquake and later redesigned with a triumphal arch facing the Tagus.

A tourist information point, the historical Martinho da Arcada café, restaurants and café terraces may be found beneath the arcades, as well as the Lisbon Story Centre which displays a multimedia exhibition on the history of the city. 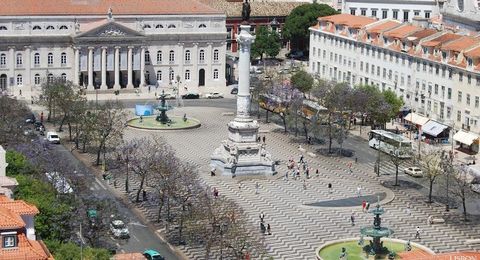 Rossio is one of the most beautiful squares in Lisbon. It is here that the D. Pedro IV statue and fountains may be observed, in addition to the D. Maria II national theatre and the famous Café Nicola, founded in 1929.

The Sé de Lisboa has an austere interior and differs from other European cathedrals since it resembles a castle when seen from the outside. It was built upon a huge mosque in the 12th century, presenting a mixture of Romanesque and Gothic styles. The stoup where Saint Anthony was baptised is close to the entrance.

At the back of the cathedral, the 14th century cloister may be observed, uncovering traces of the Roman, Visigothic and Moorish periods in archaeological excavations. In the upper floor, the ransom of Dom José may be found, dating back to the 18th century, and including the valuable bejewelled ciborium.